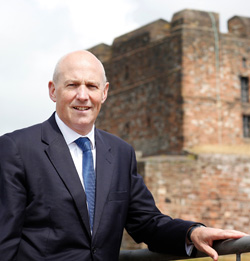 John was educated at Aberdeen Grammar School and Dundee University.

After graduating from Dundee, John went to Chester College of Law where he studied English Law and subsequently qualified as a solicitor in 1990. He went on to become a partner in Bendles Solictors, Carlisle.

John organises and hosts an annual Carlisle Skills Fair. The event is a huge success attracting over 2500 jobseekers and young people and 80 businesses, organisations and training providers from the Carlisle constituency.

He has a keen interest in business, education and local government reform and was a member of the Communities and Local Government Select Committee during the last Parliament.

John is also a keen sportsman and prior to his election he made a pledge that should he be elected he would cycle from his constituency to London. He completed the cycle in October 2010 raising £13,500 for the Eden Valley Hospice. He also cycled from Lands End to John O’ Groats raising further funds for the charity.

Aside from his duties as a constituency MP, he is the chairman of the All Party Parliamentary Group (APPG) for Food and Drink, which discusses the direction of national policy on British food and drink manufacture. He is Chair of the West Coast Mainline APPG, Chair of the APPG on Family Businesses and a member of the APPG on the Nuclear Industry, the Public Affairs and Constitutional Affairs Committee and the 1922 Committee.

John Stevenson, MP for Carlisle has Welcomed News of a Skills Boost to Support More People into Jobs

‘It’s not too late to sign up for the Skills Fair!’ says John Stevenson, MP for Carlisle

CARLISLE MP John Stevenson has said it is 'regional devolution and decision making is the key'- after a levelling up conference was held in...
View on Facebook
· Share